Hi Again! Curtis here. Recently, Shekinah set up a booth at the Living Green Expo in Saskatoon for the weekend. It was our first foray back into the world of trade shows after a lengthy hiatus with the goal of drumming up a bit more business for the Timber Lodge and connecting with a few more prospective campers. These are worthy goals, to be sure, but one might raise an eyebrow at our presence at this particular show. The question I have been asking myself over the weeks since is: do we deserve to be a demonstrator at a show that promotes green living? 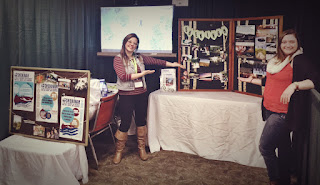 After giving much thought to that question, the answer I have come up with is yes, but just barely. I can think of a lot of reasons why we don't live up to that charge. All of our buildings are heated with natural gas, which I know is the status quo in Saskatchewan but when you look at all of the green presentations on display at the Living Green Expo, our fossil fuel set-up seems behind the curve. We buy all of our groceries for food services from a town 70km away and we pick them up weekly using a truck that is a pig on fuel when the same job could be done with a smaller, more fuel efficient car. Now, we have been trying to use more food that is produced close to home and that works a lot better in the summer, when produce is in season, and the truck is kind of our only option as beggars can't be choosers and we are certainly beggars in the vehicle department. Don't get me wrong, the camp truck is a great vehicle that is a much-needed work horse pulling out cars from snowbanks, and hopefully by next winter will be plowing snow with a front mounted blade, but wracking up the highway miles on that thing to pick up food produced in Mexico or California is pretty emissions heavy. Those are two quick examples of ways that we certainly could be doing better and hopefully our experience with the living green expo will push us to work a bit harder towards that reality. We aren't doing a terrible job by any means, but we aren't leaders in green living like we have the potential to be. 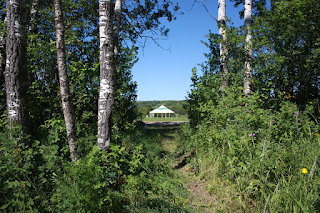 I did say though that we did, just barely, belong at Living Green and I intend to justify that conclusion. Firstly, we do have solar panels on top of the Timber Lodge. They are used to pre-heat the domestic hot water to reduce the amount of fossil fuel energy required for that piece of the puzzle. The Timber Lodge was also built using a lot of salvaged materials so we have that as a green angle. Secondly, our many activities are all human powered at Shekinah. We don't allow snowmobiles, quads, or dirt bikes on site and we encourage people to re-discover the power of their own two feet to move them around the camp, whether that is walking, running, or riding a bike. I like the way this reminds people of what our selves are capable of with engines, motors, and technology stripped away. Lastly, I want to talk about what I believe is at the heart of Shekinah's green identity: summer camp. Campers get to experience a whole week of living in a shanty (carbon footprint zero!) and immersing themselves in the sights, sounds, and smells found in 287 acres of (mostly) natural area. The bible curriculum used for once-a-day worship times teaches us to live simply, in harmony with our neighbours and with God's creation. Campers are exposed to a worldview which is in many ways radically counter-cultural and provides ways to practically live out a calling as followers of Jesus in a world where our neighbours and natural envionment are calling out for reconciliation. During camp over the last few summers, we have explored themes like making peace in different ways, being in covenant with God, being named in God's holy image, and all of these are grounded in the setting of Shekinah, which I think nurtures a humility that allows us to approach kingdom-building work with a conviction, rooted in love, to share the presence and glory of God with others. Thy kingdom come, thy will be done on Earth, as it is in heaven.
Posted by Unknown at 13:16 No comments:

Shekinah is to be a setting where all who come have the opportunity to experience the presence and glory of God through discovery, reflection, interaction, community and nature.